How Mother Teresa Got Involved with People of Bangladesh 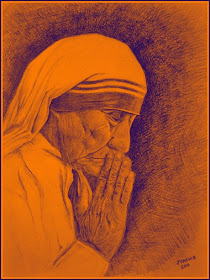 Her Service: From the Rich to the Poor

Mother Teresa, an Albanian by birth, first became a nun with the Religious Order, called Institute of the Blessed Virgin Mary (IBVM -- popularly known as "Loreto Sisters"), based in Ireland. As a nun in this Order, she started her work in Calcutta, India, as a teacher at the Loreto Convent school that catered to Bangali (Bengali) girls from well-to-do families.

Although she dealt with rich kids and their families, she, in real life situations, came in contact with the poorest of the poor people who were found abundantly in slums and streets of Calcutta. From her room in the Loreto Convent in Entally, Calcutta, she could see the daily grind of these people in the Motijheel slum below.
In her heart of hearts, Sister Teresa, IBVM, felt that teaching and serving rich girls was not her real vocation. Her keen observation and experience with the poverty of many Calcuttans convinced her that she needed to devote her life among the poorest of the poor.

With much prayer, reflection and consultation with a Belgian Jesuit priest, who was her spiritual director, she decided to leave the Loreto Order. With this end, she applied for the Pope's permission which was quite slow to come. Ultimately, in 1948, she left the Loreto Convent to work among the poor. In 1949, a former student of hers joined her new Religious Order, called Missionaries of Charity. Soon some other girls join her.

In the great and compassionate service of Mother Teresa, Bangladesh and its people played an important role. In this hundredth anniversary of her birth, Bangladeshis salute her and wish to see her as a recognized saint in the Catholic Church.
Jerome D'Costa at 10:54 PM
Share